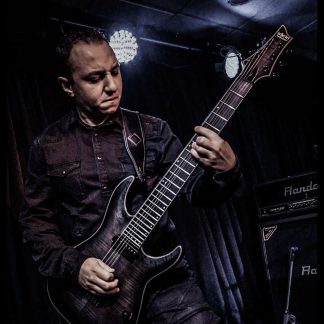 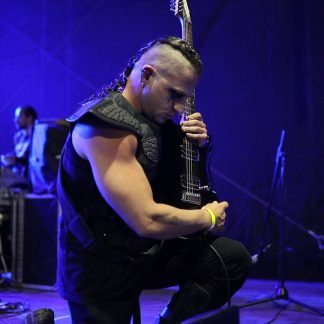 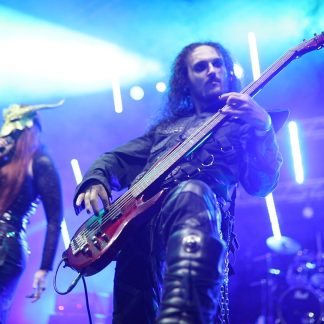 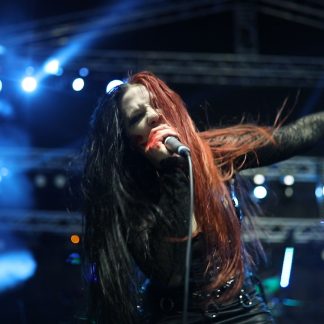 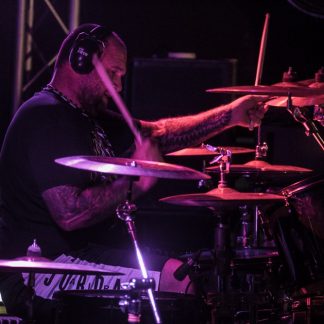 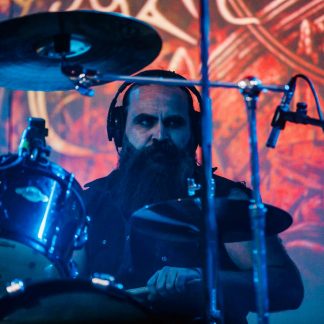 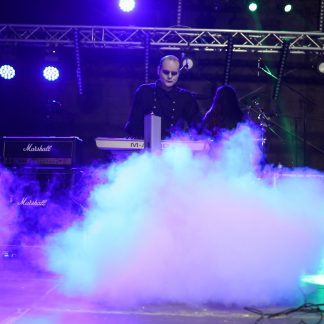 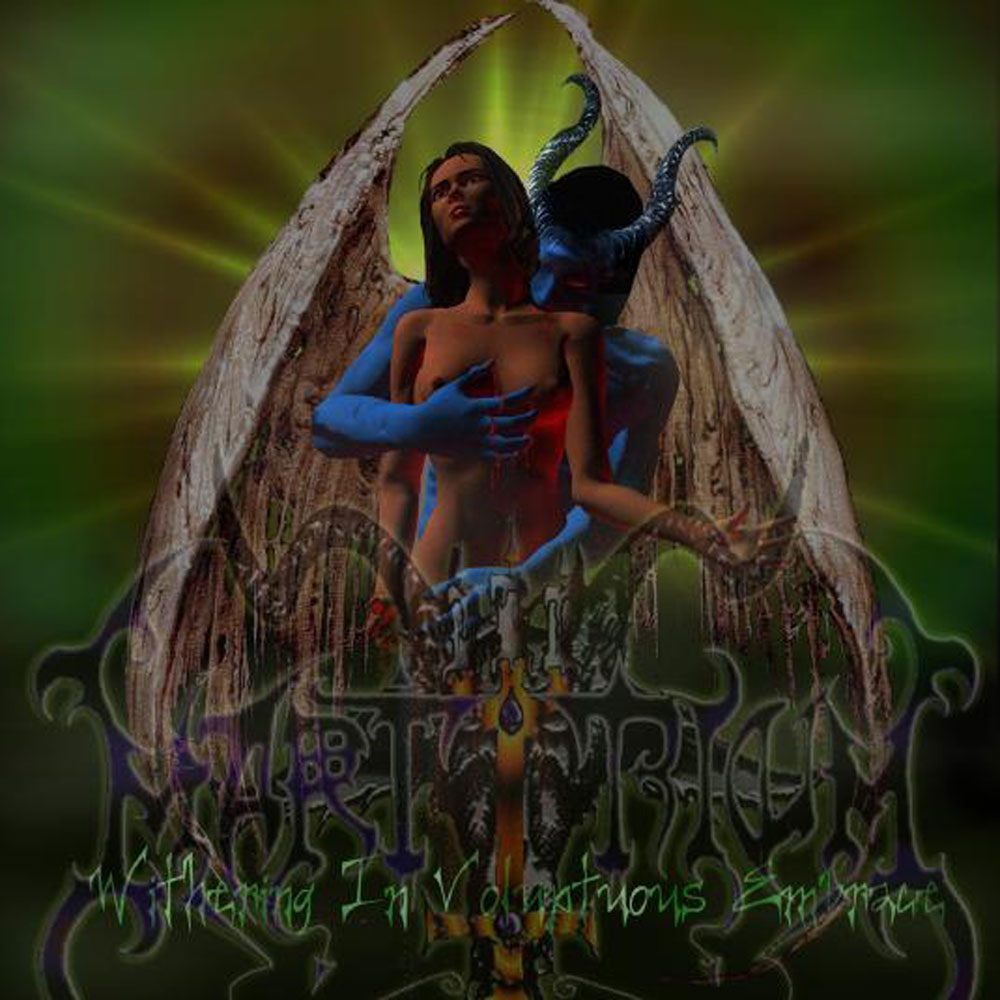 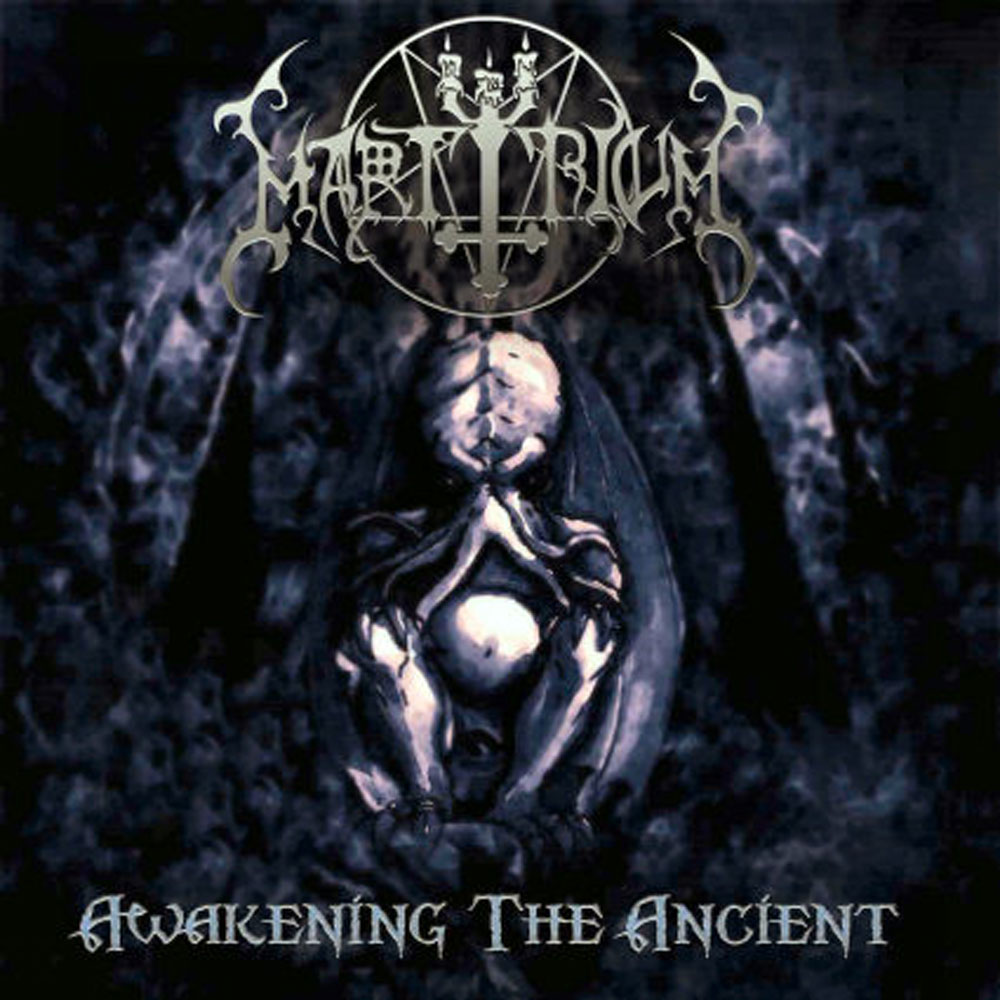 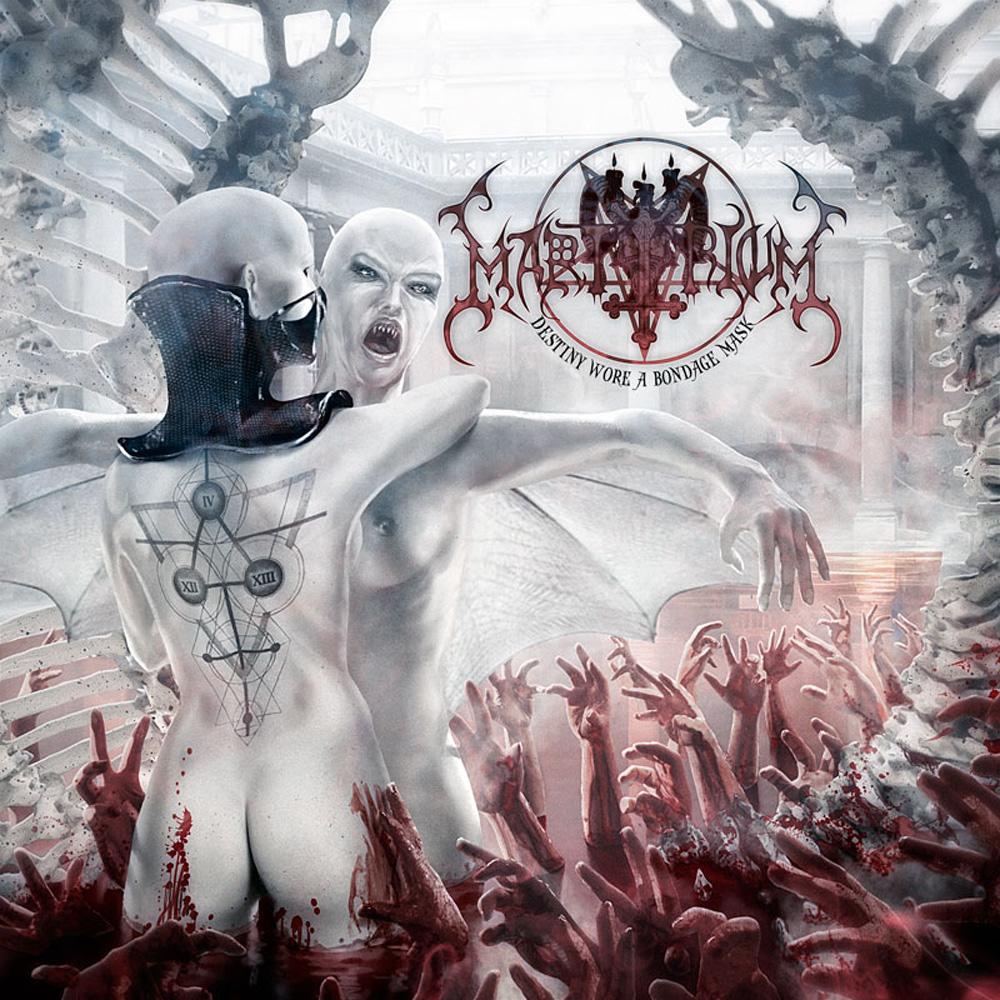 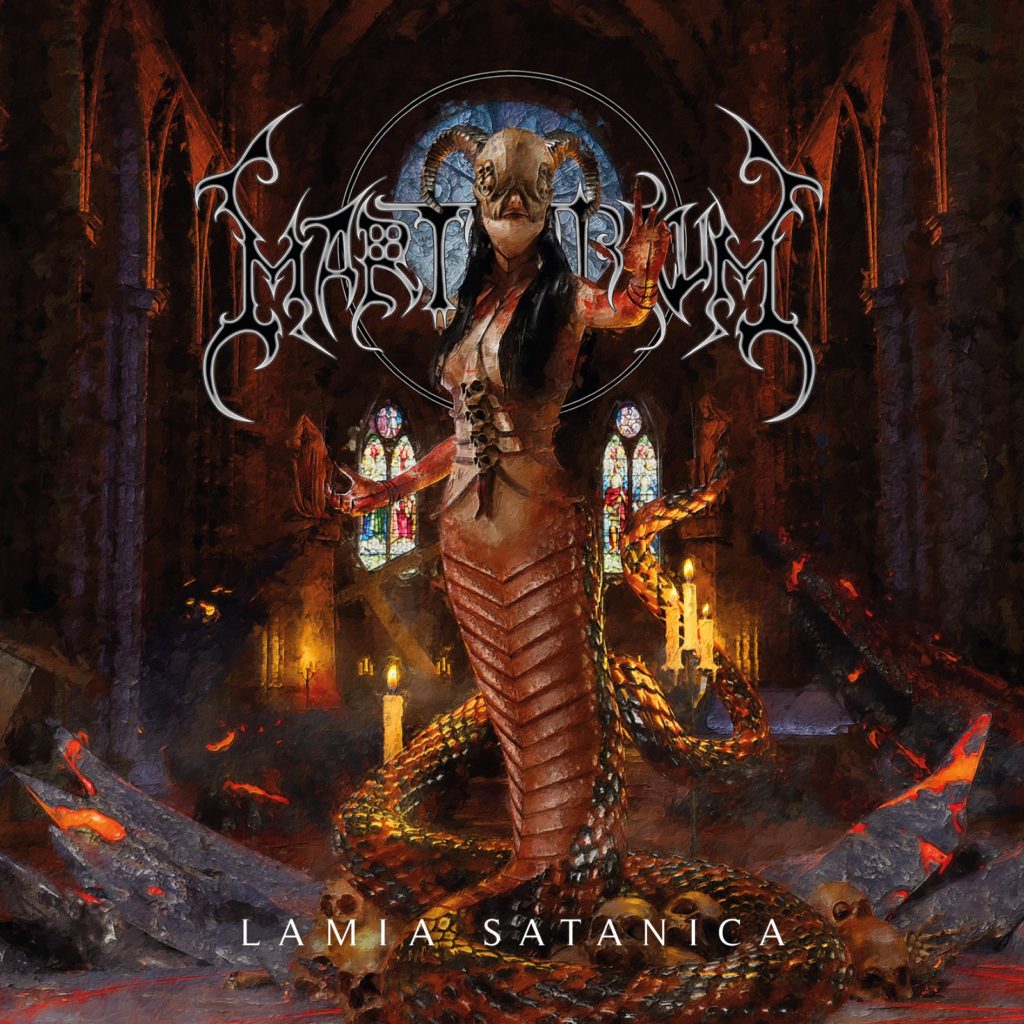 Hailing from small Malta, an island nestled in the very heart of the Mediterranean, MartYriuM was forged in the year 1999 from the dying embers of the second wave of Black Metal – quick to grasp its own sound and ground, the band took fire and ignited a wick of relentless shows on its home turf, promptly working on and finally exploding its first album in 2002 entitled ‘Withering in Voluptuous Embrace’, a release that sent shockwaves through the at-the-time unprepared and unaccustomed local scene. ‘Withering’ in name only, the album swiftly became favorite fodder to hungry crowds during bloody shows, and remains so to this very day.

Aptly named ‘The Carnage Lit By Darkness’ saw its light in 2005, a light that shone new aural darkness in the band’s sound; drawing blood from its predecessor, this second blast of symphonic black metal was laced and graced with the industrial elements for which MartYriuM would start to be know for. ‘Carnage’ was what first put the band on international ears and eyes, received and selling well, summoning metal hearts and minds to get in touch. The album is a sought-after release for both fans and those who crave such sinister and gothic orchestrations, and has been re-released on many occasions.

Many gigs under their studded belts and the murderous ‘Awakening the Ancient’ followed suit in 2010, ushering the horde into a finer decade of musical endeavors and the more experimental ‘Destiny Wore A Bondage Mask’ in 2015 – by now and on the warpath, the band was spreading the word of Satan across countless European shows and building up a solid reputation as a hellish live act.
Back to present day, its third decade on Earth and riding on the graciously received ‘Lamia Satanica’ as their fifth infernal vexilla regis, MartYriuM stands ready like a beast, angrily biting this pandemic leash to be unleashed from plague unto a new era of glorious shows and the ravening wings of the true Black Death!

1999 – 2005
MartYriuM was formed by Count Mortem in 1999 who conveyed his ideas into a mix of black/death metal riffs. Alongside Úmarth who contributed a deluge of sinister orchestrations focused on bringing the much desired dark atmospheric tone. From the beginning of MartYriuM’s creation the band had an established signature sound which remained present in all the future releases. MartYriuM’s sound is known to breed an air of brutality and despair that stands out in the underground scene and always receives a positive feedback from the crowd.
In the year 2000 MartYriuM bestowed an arsenal of authentic tracks at a local venue, introducing the black metal genre to the Maltese metal scene for the first time, summoning a captivating response for its controversiality. The pursuing year the first album was recorded in Temple Studios, entitled ‘Withering In Voluptuous Embrace’.
The release consisted of highly dense and multilayered symphonic black metal, moving from morbid ambiances to vitriolic, violent elements.
Aspired to get recognition abroad, the band approached foreign promoters presenting their material which attracted the South American label ‘American Line Productions’. Within a concise time extent, they developed and sold a sufficient number of MartYriuM CDs amongst their batch of followers. Thus American Line Productions decided to open a new label ‘Witchcraft records’ pioneered by MartYriuM, that concentrated more on Extreme metal bands. Manifesting their presence to magazines such as ‘Displeased’ , ‘Nuclear Blast’ and others.
Amid the year 2004, a French promoter set up the bands first tour, ranging from ‘Negasonic Music Club’ in Belgium, Luxemburg and ending their odyssey in Northern France, sharing the stage with Morrigu, Earaction and other supporting bands.The positive feedback from the throng of fiends concluded the first tour a success.The exceeding gigs included the Greek legends ‘Rotting Christ’ as well as the brutal German death metal band ‘Purgatory’.
By summer’s end of the year 2005 MartYriuM experienced another tour in central Europe, welcomed with even more enthusiasm than the previous year, they celebrated the second assault entitled ‘Carnage Lit By Darkness’. This time approaching a more redolent, belligerent barrage of sound. The MartYriuM legion commenced from Germany, re-infesting France, followed by Italy and ending the carnage in ‘Club Dynamo’ in Switzerland alongside ‘Eluveitie’ , ‘Black Messiah’ , ‘Daargesin’ , ‘Cruachan’ and ‘Ivenberg’.

2010 – 2012
This year endured the unleash of MartYriuM’s third opus ‘Awakening The Ancient’ which continued to enblaze their trail of desecrated conventions into the orifice of society to an extent that the track ‘Temple Of The Unknown Knowledge’ was featured on the Valletta 2018 video, commissioned by the Valletta 2018 Foundation, representing the Maltese metal scene in the European Capital of Culture(ECoC).
In this period MartYriuM went through a line-up change.

2013 – 2014
The ensuing events that followed included Local appearances in major events as well as Italy and later on Czech and Slovak tours sponsored by Blackcloud Productions.

2015
MartYriuM were busy with the recording, mixing and mastering of the 4th full length album “Destiny Wore a Bondage Mask” at Spine Splitter Studio (Malta) and Tower Studio with Brett Caldas-Lima (France). This left little time for live shows, MartYriuM participated in a few local acts and supported the masters of horror metal Cadaveria.

2016
The band signed with Art Gates Records and their 4th full-length album “Destiny Wore A Bondage Mask” was released in March as well as second music video “NECROPENDULUM” , filmed and produced by local horror film maker Patrick Vella and Frank Psaila. MartYriuM appeared in high rated festivals Female Fronted Metal Extreme, Metal Over Malta and this summer at Carpathian Alliance and will continue to spread the brutality and despair from the new album! Also backing vocalist Pandemonia joined as a session member with the unholy alliance for the upcoming shows, enhancing the bands theatrical performance!
This year MartYriuM founded an event organization called VOTS that consists of two extreme metal festivals “Voices Of The Succubi” and “Dark Winter Meeting” , in which metal acts from all over Europe will be united.

2017
MartYriuM sign with The Flaming Arts Booking and Management.
The band has a solid tour plan, including 12 European countries and highly acclaimed festivals such as “MetalGate Czech Death Festival” in Czech Republic, “Metalhead Meeting” in Romania, “Gothoom” in Slovakia, “Carpathian Alliance” in Ukraine, “Seas of Black” in Bulgaria, “Metal Head Mission” Ukraine, “Moscow Black Metal Convention” in Russia, a short tour supporting Noctem in Russia, “Warhorns” in UK, “Autumn Souls of Sofia” in Bulgaria, “Metal Circus V” in Italy. During which MartYriuM gain a reputation for the engaging stage presence and occult imagery.

In the meantime, the band composes the 5th album which will be recorded and released in 2018.

MartYriuM’s guitarist Sherath gets an endorsement from Fusion Bags and Taurus Amps.

Apart from developing the band, MartYriuM continue to contribute to the metal scene by hosting events in Malta under the name VOTSfestival.com, by bringing headliners such as [IN MUTE] (“Voices of the Succubi” Metal Festival 2nd September 2017) , Sinister (“Novembers Gathering of the Unblessed” 18th November 2017) and Hate (“Dark Winter Meeting” Metal Festival 28th January 2018).

Shop our CDs and Merchandise from here